Battle of the Bands??

I just came back from some band concert held at Bangkok Jazz. This is also the first time to Bangkok Jazz. Hehe. Guitar Store and Music School (if i'm not mistaken) organized a battle of the band concert where students and teachers from both institute get their chance to perform live in front of the audience. In my opinion, some are really good while some are just so-so. But no matter how terrible their voices are, for me they are still good because they are brave enough to perform in front of so many people. *clap clap clap* No photographs though because that place was quite dark. Hehe.

Anyway, my past few weeks had been really... normal I should say. Go to work, come back, eat, sleep, go to work, come back, eat, sleep and the process continues on weekdays. While on weekend, Saturday is Kitt's day while Sunday is my family day. But next week, I'll be only working on Monday and Tuesday because early Wednesday morning i'll be going to Macau and Hong Kong with my mum and my 2 cousins!!! Yippie!! We'll be visiting Disneyland too. I'm so excited. This trip is my birthday present from my mum. So thank you mummy. Dad gave me money for shopping in Hong Kong. YAY!!!! Thanks dad. I'm so excited!!! Too bad Kitt can't join us because he have to attend lectures and his Final Year Projects. Aihhhh.... Guess I'll have to babysit my 2 naughty cousins alone. Hope they will not get any scolding from me ( i doubt that) Hehe.

In just that one month, I realised relationship especially the bf-gf one can be really ...... I don't have a word for it. Lies, betrayal, trust, care and LOVE are the key ingredient in what I have observed all this while. They are some that seemed to be "trying out" a lot of options but then it might not seemed to be fair if you are trying out a lot at the same time. It's like the survival test. But hey, the last one standing might not be the ideal one. So Miss P, please think carefully and don't play with fire. You might lose everything in the end. Besides that, lies and betrayal. I hate liars. I really do. I guess a lot of my friends will agree with me too. They are some skillful liars out there that can tell a lie without feeling guilty. Seriously, you don't have my respect anymore even though you are not telling that lie to me. Who knows whatever that is coming out from your mouth when we're talking is the truth or lie? I just don't trust you as much as I do anymore.

But hey, different people will see LOVE in different type of ways. No matter what, I will always hope that those that I really care will be happy in their relationship (current or future). Those who are currently attached, congratulations. For those who are currently single, Gambateh. Your ideal guy/girl is still out there waiting for you. They might be people around you *hint hint hint to Miss PS* Hehe... For those who are still experimenting, I hope that you hypothesis will be accepted in the end and not rejected. Haha....

Gosh... why does my entry sounds so emo. I wonder what is wrong with me this month. Haha....

Kitt and my close friends held a birthday party for me. My birthday was on 4th of November but the party was held on 3rd of November. I know there will be a party but I have no idea who will show up. Conclusion: The number of people that show up doesn't matter, what matter is the people who came. I'm really grateful that I was blessed with great company on my birthday eve. Less talk, more photo... hehe. 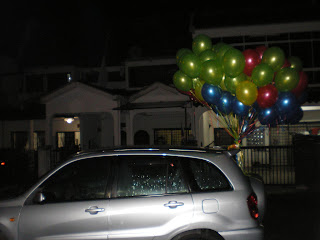 My first surprise.... 100 colourful balloons to replace the old fashion 100 flowers. Hehe. This is a present from Kitt. It's so sweet. I was in tears when he drove his bro's car and honking. It was very beautiful. This is way better than flowers. Hehe. Thank you. 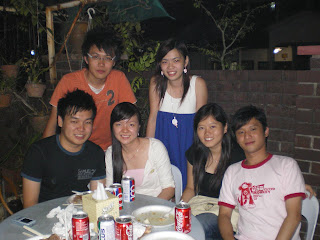 My second surprise.... My friends from Malacca came to the party. As I have mentioned earlier, I have no idea who will be attending the party. But I never expect them to come. Really thank them a lot for coming especially Chau Yen and his gf. Chau Yen have to drive all the way back to Malacca at 12 something in the morning after the party while my kai kor and Tau Hong drove back to Cyberjaya. Hehe. Thank you very much. 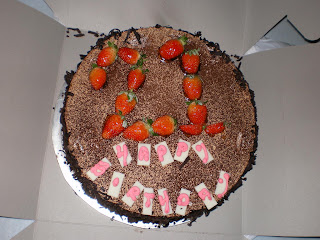 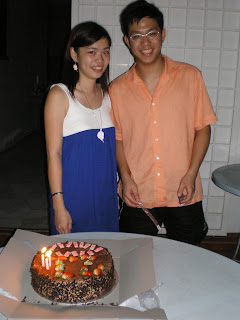 My birthday cake. The cake was chocolate cake decorated with strawberries. Hehe. The cake was very very nice. It was present from Kinn and Ken, Kitt's younger bros. Thank you very much guys. According to aunty, the cake was made of some imported chocolate, which is quite expensive. The cake was really good. Hehe. Happy happy. 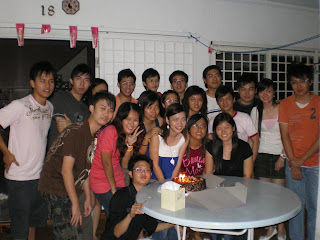 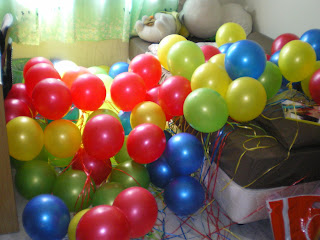 This is what my room looks like on 4th November. I gave everyone one balloon when they leave. Some took a few. I brought home the rest. Hehe. No place to walk around my room now. Hehe.

I can't upload too many photos due to the size of the photographs. I have to resize them in order to speed up the photo uploading process. Hehe. After the party, we played some card games. Keat, Kitt, Alwin, Nicole, PuiC, Mun Keong were drunk. Or maybe "high". Haha. It was so funny. They kept on talking non stop. At 3am, I had to end the party because they are really hard to control. They are very noisy and the dog won't stop barking. Hehe. So I have to "halau" them home. Hehe.

Presents? Well, I received quite a number of present.... including my lollipop earrings and necklace. My attire for the night ( shirt-dress, lollipop earring and necklace ) was present from my friends. I look like a lollipop princess that night. Haha. Have to act cute when they took my photo to follow my theme. Hehe. It was hilarious. Can't show too much photos of myself. Hehe. 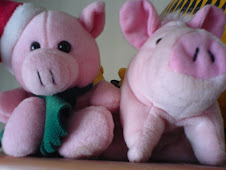